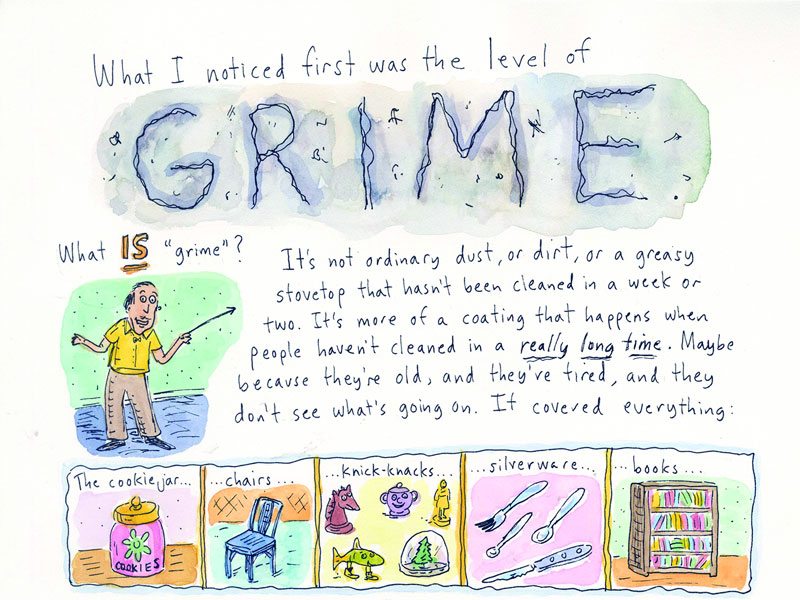 (Published in SF Weekly on May 4, 2017: http://www.sfweekly.com/culture/art/roz-chast-and-the-influence-of-anxiety/)

Roz Chast is very funny. Everyone who reads her New Yorker cartoons knows this. In fact, that’s all they really knew about Chast until 2014, when she published her graphic memoir, Can’t We Talk About Something More Pleasant?, which details her stressful childhood and the demanding years she spent caring for her elderly, health-challenged parents. Suddenly, Chast’s fans got to know entirely different sides of her: Chast the worrier; Chast the crier; Chast the screamer; and even (gasp) Chast the hater!

Humor is the memoir’s driving force, but its pull is in the details of Chast and her parents’ stress and suffering. She vividly depicts their physical and mental deterioration and includes multiple up-close drawings of her mom on the precipice of death at age 97. Her dad died at 95 in the throes of pain and dementia. Taking its title from her parents’ denialism, Can’t We Talk About Something More Pleasant? won a National Book Critics Circle Award, was named one of the New York Times’ top 10 books for 2014, and has now spawned a touring art exhibit, “Roz Chast: Cartoon Memoirs,” currently ensconced at San Francisco’s Contemporary Jewish Museum.

“I don’t think it’s much of a secret that we all have parents who get old and die, but I didn’t share that in my cartoons,” Chast tells SF Weekly.

Still, she says, her New Yorker cartoons, which have appeared in the magazine since 1978, have always hinted at the anxieties of her life, since “my life is material.”

“For some people, their cartoons come out of a completely closed cartoon universe, and that works for them and that’s all they really want to do,” she says. “For me, the boundary between my life and the cartoon universe is a lot more porous. I do things from the cartoon universe. I love the end-of-the-world guys, with sticks, but they flow into one another more.”

As she talks, Chast sits in the middle of the Contemporary Jewish Museum’s second-floor exhibit space — on a bright red couch that’s a fill-in for the kind of furniture Chast would sit on with her parents in their longtime Brooklyn apartment. Nearby, under glass, are decades-old mementos from her parents’ home — some of the scores of books, photos, and memorabilia that her parents hoarded away and that Chast documents so funnily in her memoir.

George and Elizabeth Chast, who stuffed things into what their daughter calls a “Crazy Closet,” were low-grade hoarders, and Elizabeth was prone to fits of rage. She constantly berated her husband and their only child, and she basically beat up Roz when she was just four years old. “Hell” is one way that Chast describes her childhood in Can’t We Talk About Something More Pleasant? But the turmoil and dysfunction had a silver lining: It created Roz Chast’s search for an escape, which she found in drawing, words, and humor. (And, eventually, in a new home life in Connecticut with her partner and their two children.)

Without the ugliness in Chast’s childhood, there would be no cartoons like the one Chast drew and wrote for Worth magazine, called “Dumbest Pacts With the Devil Ever,” which includes a panel of an anguished woman in hell with the text, “Traded soul for front-row seats at Bread concert.” (“What was I thinking?” the woman asks as a red devil laughs it up in the nearby flames.) At the exhibit’s opening night, the first guests couldn’t stop laughing as they went from “Dumbest Pacts With the Devil Ever” to the 200 other cartoons on display, which include most of the panels from Can’t We Talk About Something More Pleasant?

Concentrated in a single exhibit, in which some images are enlarged to life-size, the cartoons accentuate Chast’s instantly recognizable drawing style — including the crazy expressions on characters’ faces, and their often-askew hair — and the turns of phrase that have prompted New Yorker editor David Remnick to call Chast “the magazine’s only certifiable genius.” That genius is usually filtered through the pages without any need for Chast to interact with readers, so Chast’s appearance at the exhibit’s opening night was a rare chance for people to meet the cartoonist face to face. People wanted to hug her. Chast obliged, though earlier in the day — as she met with journalists — she’d joked that talking about her life in public and revealing so much about herself were like psychotherapy, and that, “I think I should have a couch to lie down on.”

Chast says she inherited her love of words from her father, with whom she felt a close connection. Her mom is another story. Even till the end — even as she took care of all her parents’ needs by staying with them, and shopping for them, and driving them places, and arranging for nursing care, and cleaning up for them (including her mother’s incontinence) — she wrestled with their relationship. In Can’t We Talk About Something More Pleasant?, Chast says she feared her mother, who spent her life commanding people from her perch as a schoolteacher and as a wife and mother.

“When I was growing up,” Chast writes in her book, “one of her favorite argument-enders was: ‘I’m not your friend. I’m your mother.’ If you hear that enough times, it becomes hard to switch gears just because some years have gone by. My mother was no longer my enemy when I grew up, but that didn’t make her my friend.”

Like Iranian-French humorist Marjane Satrapi’s popular graphic memoir Persepolis, which became a 2007 animated movie, Can’t We Talk About Something More Pleasant? could easily be turned into a cinematic vehicle. Chast tells SF Weekly that filmmakers have talked about doing that since her book was first published. And she deliberately wrote Can’t We Talk About Something More Pleasant? after her parents’ deaths. Chast didn’t want them to know that their lives — including their foibles — were on display for anyone to see. But her aunt and daughter are still alive, and they have mixed feelings about Chast outing everything about the family. She says those feelings are a sign that the book, and now the touring exhibit, hit a nerve.

“I was on the phone with my mother’s sister shortly after the book came out, and with my cousin — her daughter — and they were kind of upset by some things,” Chast says. “My cousin said that my mother’s mother didn’t wash clothes for other people — that she cooked for other people. And I remembered that my father’s mother was the one who washed clothes for other people and I thought, ‘Oh, man. I suck. I completely screwed that up.’ And then I thought, ‘Well, all right. She cooked. She didn’t wash clothes.’

“She and my cousin said, ‘We cried at the end,’ ” Chast adds. “But it’s a sad story, you know — for everyone. Sometimes you eat a very good grilled-cheese sandwich. And this is the most wonderful thing! Or you see a great movie. But it’s like that New Yorker cartoon with the Grim Reaper. Everyone knows from the time you’re four years on” about the Grim Reaper.

“It’s not really a happy ending, I hate to tell you,” Chast jokes. “It’s not going to end well — any of this.”

A few minutes after Chast spoke with SF Weekly, the exhibit was officially open, and three middle-aged women perused a cartoon called “The World’s Luckiest Woman” that lists five standards, one of them being, “Daughter doesn’t care what you wear.”

“You look clean and comfortable,” the daughter tells the mom in the cartoon. “Ah-ha,” one of the women said, as if she recognized her own life in the drawings. “Oh, my God,” her friend said, “this is spectacular.” Their talk and their laughter filled the room for everyone to hear. The reference to “God” would have humbled Chast’s parents, who were not religiously adherent. It might have even made them laugh.