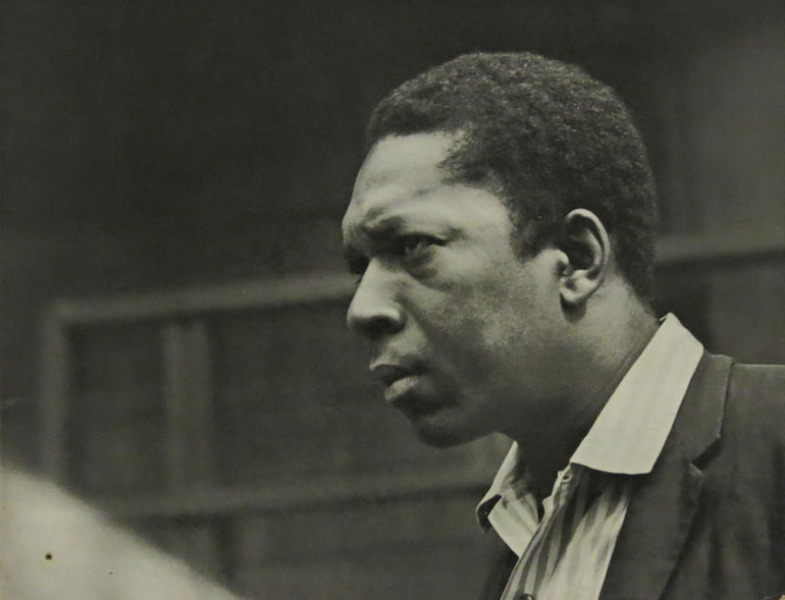 Even the album’s cover photo is unforgettable – and a bit jarring. Is John Coltrane angry? In pain? Contemplative? A Love Supreme is one of the most recognizable, most successful and most influential jazz albums in history. Recorded in 1964, it’s Coltrane at his best, a milestone piece of art that set a new standard for jazz language, and is to music what Joyce’s Ulysses is to literature or Scorcese’s Taxi Driver is to film.

In four parts that last 33 minutes, Coltrane’s album ascends scales with verve and intensity, moving from intimate note-making and soulful introspection to, as in the third part called “Pursuance,” all-out explosions of fury and finality. Coltrane devoted the album to God, but A Love Supreme can be understood by any listener, from any culture, as a journey of discovery. The highs are there in abundance, but so too are the stops and starts and transitions – the mesmerizing transitions – that lead to the journey’s end. Salvation doesn’t come without struggle. Beauty is found in dissonant notes. Generations of music-lovers and musicians, including Carlos Santana and U2’s Bono, have embraced A Love Supreme as divine music.

From Wednesday to Sunday (December 10-14), SFJAZZ is celebrating the 50thanniversary of Coltrane’s album with six major events that pay homage to Coltrane’s vision and its continuing influence on the world of jazz. Coltrane’s saxophone-playing son Ravi, named after the Indian sitarist Ravi Shankar, is featured in the first five events, starting with a Wednesday symposium (Dec. 10, 7:30pm) at the SFJAZZ Center that also features Ashley Kahn, author of the must-read 2002 book, A Love Supreme: The Story of John Coltrane’s Signature Album. When I interviewed Ravi Shankar in 2002, he remembered meeting Coltrane in the 1960s and finding “turmoil” in Coltrane’s music. The turmoil, Shankar said, was disturbing.

But in re-listening to A Love Supreme for Kahn’s book, Shankar rethought this view and told Kahn he found the album “beautiful, especially the climax in the third movement (“Pursuance”), then the resolution of the whole last piece (“Psalm”).”

“Psalm” does, indeed, resolve A Love Supreme, with drummer Elvin Jones, pianist McCoy Tyner, and bassist Jimmy Garrison all joining Coltrane’s saxophone in a sustained and gripping convergence that lasts seven minutes. The intensity of A Love Supreme can be challenging for first-time listeners. Coltrane died in 1967 at age 40, and his last three years of recordings, when he veered into more and more ecstatic music, are Coltrane at his most fervorous. In Live in Seattle, which was recorded in 1965, Coltrane and saxophonist Pharaoh Sanders frequently employed “squawking” – bursts of atonal riffs – that turned off many of Coltrane’s earliest fans. As a bandleader, Coltrane’s most accessible album is My Favorite Things from 1961; the title song plays with the signature tune from The Sound of Music.

Coltrane was always pushing himself in new directions. Where My Favorite Things – like A Love Supreme – sounds as fresh today as it did decades ago, it was a relatively safe creation. A Love Supreme was deeply personal. Coltrane, who was raised in North Carolina with the religious values of the black church, went though a period of heavy drug use in his late 20s and early 30s, and then kicked his habit in 1957. In the liner notes of A Love Supreme, Coltrane said his new compositions were testimony to God’s guidance and of his “richer, fuller, more productive life” and his ability “to make others happy through music.” But Coltrane implied that he still struggled with addictive behavior.

“As time and events moved on,” Coltrane wrote about his post-1957 life, “a period of irresolution did prevail. I entered into a phase which was contradictory to the pledge and away from the esteemed path; but thankfully, now and again through the unerring and merciful hand of God, I do perceive and have been duly re-informed of His OMNIPOTENCE, and of our need for, and dependence on Him. At this time I would like to tell you that NO MATTER WHAT … IT IS WITH GOD. HE IS GRACIOUS AND MERCIFUL. HIS WAY IS IN LOVE, THROUGH WHICH WE ALL ARE. IT IS TRULY – A LOVE SUPREME.”

On the album’s songs, Coltrane keeps the words to a minimum. The album begins with a Chinese gong, transitions to Coltrane’s brief scale-hopping, and settles into a stretch of relative quiet that is ruminative, introducing the four notes that correlate to the syllables and sounds of the words “A Love Supreme.” Then at 1:05, Coltrane takes off. For five minutes, he lets his saxophone wander in arresting directions, riffing, squawking, and improvising until slowing down and reclaiming the four-note bar that began the song. At 6:07, Coltrane chants the words “A Love Supreme” over and over – softly but assuredly – until 6:44, when Garrison, Tyner, and Jones pick up the atmosphere of the opening gambit and continue until the song, called “Acknowledgement,” ends a minute later. Achingly beautiful. That’s how I’d describe the entirety of A Love Supreme.

The events are sold out or close to selling out – no surprise given the theme, the names involved, and SFJAZZ’s venue, which is an ideal place to hear music. But year-round, you can hear Coltrane’s music live, at the Saint John Coltrane African Orthodox Church on 1286 Fillmore Street between Turk and Eddy in San Francisco. Archbishop Franzo King, who is officially ordained by the African Orthodox Church, started the church in 1971, six years after seeing Coltrane perform and leaving convinced that God was speaking through his songs. Playing saxophone with other church clergy, King uses Coltrane’s music – especially A Love Supreme – to preach God’s salvation. Attending the Sunday mass at noon is an experience like no other.

In 2000, when the church was located on Divisadero Street, Franzo King told me that Coltrane’s widow, the musician Alice Coltrane, had attended service at the church in the 1980s and blessed his work. “She walked into this building and told us that we were fulfilling John’s highest ideal,” King says. “His music,” King adds, “is still alive.”

It is. This week’s SFJAZZ celebration is further confirmation that A Love Supreme is still a powerful work, still able to inspire people who hear its transportive notes and realize they’ve experienced something much deeper than “jazz music.”

SFJAZZ is celebrating the 50th anniversary of John Coltrane’s A Love Supreme with a symposium and five concerts from Wednesday, December 10 to Sunday, December 14, 2014. For tickets and more information, visit sfjazz.org.